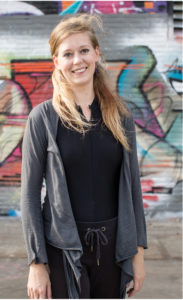 I started dancing when I was about 9 years old. But even before I had ever set foot in a dance school I wanted to be a ballet teacher. So when I finally started dancing there was no stopping me. Soon one ballet class a week turned into multiple classes with point shoes, caractere, contemporary, tap and flamenco. After a successful audition for the Highschool of Music and Dance of Codarts in Rotterdam I started my professional training.

After more successful auditions throughout the country I chose to study at the Dance Teacher department of the Theaterschool in Amsterdam. This program gave a lot of space for choreography and this gave me an opportunity to express my creativity to the fullest. And even though flamenco was not part of the program I could not stay away from it. After a short period of intensive private lessons in Seville with Carmen Segura Rodriguez I was sold. I had to go back, and so I did. I went back for five weeks of intensive classes at the Museo del Baile Flamenco de Christina Hoyos where Juan Paredes made me even more excited about flamenco. I have also participated in the Curso Intensivo de Verano of the Fundacion Christina Heeren in Seville (summer ’07).

My other big passion is contemporary dance. Since the summer of 2008 I am a regular guest teacher for the Centre de Danse du Marais in Paris. For my other contemporary classes check the NEWS page. I also believe that you should always keep learning and because of that I also moved to New York City (United States) in 2010 to study Cunningham Technique. I was privileged to study in the International Training Program of the Merce Cunningham Studio with the help of a Foreign Fulbright Award and en grant from the Prins Bernhard Cultuurfonds. A lot of what I have learned here I use in my contemporary classes.

After returning from New York City I started with a pre-master course in Public Administration at the Erasmus University Rotterdam. I received my Master of Science title in Public Management after completing my internship at the Arts Department of the Ministry of Education, Science and Culture in the Netherlands. Here I was involved in projects centering around new forms of financing in the arts. I wrote my thesis on leadership in the changing cultural sector in the Netherlands. Since graduating from the Erasmus University I have helped several cultural organizations with the business side of things. I have worked for Theatergroup Poolse Vis, Art Generation, ZID Theater and Holland Dance.

Even though all these organizations have challenged me in different ways, dance is always an integral part of my life. So in the spring of 2016 I was part of Pictures of Things by Amos Ben-Tal that was performed at Korzo Theater. In the summer of 2016 I was teaching in Paris again for 2 months and after that I worked for Attakkalari Center for Movement Arts in Bangalore (India) for 6 months and in 2017 for another 4 months. In 2017 I also got to be part of the Monday Movement Intensive showing choreographed by Heather Ware (Leine & Roebana) in collaboration with Korzo Theater. After which I’ve travelled to India twice – to Bangalore and to Himachal Pradesh – to Paris, to San Francisco and for the coming year there are many more dance travels planned.